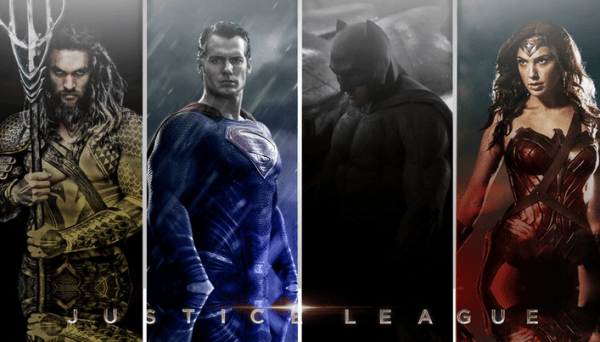 Just last week at the annual Comic Con, quite a number of movie trailers where released in anticipation of the upcoming movies.

This year has been a good year for movies so far. Earlier in the year there was DC’s Batman Vs Superman, Marvel’s Captain America: Civil War and it’s about to get better.
The top two comic book movie studios Marvel Studios and DC are always at loggerheads, trying to out-do each other with the movies they put out. Just last week at the annual Comic Con, quite a number of movie trailers where released in anticipation of the upcoming movies.

1. Justice League : As a continuation of Zac Snyder’s Batman Vs Superman : Dawn of Justice, Justice League is set to be released next year. The movie features other superheroes; The Flash, Aquaman and Cyborg who team up with Wonder woman, Batman and Superman to fight the threatening villain.

2. Wonder Woman: The female super hero made her debut as the gorgeous bad ass in Batman Vs Superman. An independent movie will be dedicated to her story, starring Gal Galdot will be out in 2017.

3. Suicide Squad: Though the movie is released in August, 2016 yet another trailer was released to whet the appetite of fans. The movie gives fans another opportunity to see Will Smith as a ‘super hero’

4. Marvel’s Dr Strange: Benedict Cumberbatch stars in the Marvel Movie alongside Chiwetel Ejiofor. A second trailer was released and the movie effects resemble 2010 movie ‘Inception’. The trailer gets you to the edge of your seat and luckily you don’t have to wait till 2017 to watch it, the release date is November 2016.

One Response to “Movie Trailers You NEED to see.”

Get started with GTCrea8
GIST
Games
YOU ARE READING