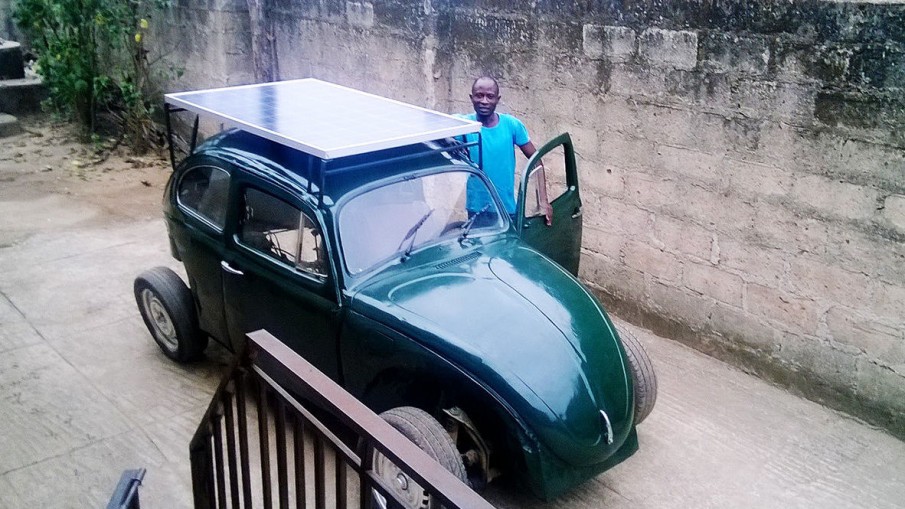 With scraps and ₦1 million, Segun Oyeyiola is about to change the world.

Segun Oyeyiola, a final year engineering student at the Obafemi Awolowo University, Ile-Ife, has successfully converted a petrol engine Volkswagen Beetle into a car that runs on solar and wind energy. Using scraps and materials that have cost him close to ₦1 million, Oyeyiola has spent the past year working on the project which, in his own words, is driven by the need to reduce global warming:

“I wanted to reduce carbon dioxide emission[s] going to our atmosphere that lead to climate change or global warming which has become a new reality, with deleterious effect: seasonal cycles are disrupted, as are ecosystems; and agriculture, water needs and supply, and food production are all adversely affected.” — Email from Oyeyiola to Co.Exist

The process of retrofitting the Volkswagen Beetle involved mounting a large solar panel on the roof of the car and installing a wind turbine under the bonnet. As the car moves and air passes through its body, the wind turbine charges a sizeable battery that keeps the car running. Oyeyiola also had to rebuild the car’s suspension to bear the considerable weight of the battery. All of that was not easy, as he had to deal with the challenges of finding the best materials to work with and negative criticism from people who think he should be doing better things with his time.

The car is basically a working prototype, considering that its battery’s four to five-hour charging time makes it unsuitable for everyday use, but Oyeyiola whose final exams end on May 15 is determined to “keep improving on it, until it becomes Nigeria’s future car.”

How are you impacting your world?